Just five simple ingredients make up this delicious breakfast treat!  Brown rice is the perfect base for a twist on the classic "overnight oats" concept.  This overnight brown rice breakfast pudding is vegan, gluten free, and tastes more like dessert than breakfast!

Disclosure:  By posting this recipe I am entering a recipe contest sponsored by USA Rice Federation and am eligible to win  prizes associated with the contest. I was not compensated for my time.

Overnight oats have become all the rage over the past year, and that was the inspiration behind this recipe.  But there is one big difference between this recipe and traditional overnight oats - it uses cooked brown rice in place of the oats.  Oats are a whole grain and the instant or rolled varieties most of us use cook very quickly, so letting them sit overnight in the fridge soaking in a liquid will actually "cook" them as they soak up the liquid and become tender.  But when using most of the other whole grains like brown rice, quinoa, barley, or farro, they take longer to cook due to the super healthy fiber-filled outer layer (the bran).

So with this recipe, the one big thing to remember is that you absolutely must start with cooked brown rice.  Otherwise, you will wake up to a crunchy, watery mess waiting for you in the fridge instead of a creamy flavorful pudding!

In addition to being healthy and really easy to make, this recipe also happens to be vegan and gluten free!  Rice is one of the few grains that is gluten free by nature - you can buy gluten free oats which are processed completely separately from any wheat, but they will cost quite a pretty penny.  That's one of the reasons to "think rice" -  It's one of the biggest nutrition bargains in the grocery store. A one-pound bag of brown rice costs right around $1 at my grocery store, and there's enough rice in there to make a whole bunch of meals.  I look for the "Grown in the USA" logo on the front of the rice package because this indicates rice that is 100% domestically grown -  and I've found that it's the same price as the rice that's come from other parts of the world.

If you happen to be short on time, there are a couple of quick-cooking rice options on the rice aisle.  These are "parboiled," meaning they've already been cooked part of the way then dehydrated and packaged.  This quick cooking version of rice looks similar to the uncooked brown rice, but instead of taking 45-60 minutes to cook, it usually takes about 10 minutes.

Personally, I usually go for the uncooked version because it's cheaper and I find the rice comes out a little fluffier.  I just cook a batch of rice while I've got the TV going in the evening or while I'm busy doing other things in the kitchen.  To me, making a large batch of grains at the beginning of the week doesn't require much time and the result is much faster meal-prep throughout the rest of the week.

Now if you don't have time for regular or even the quick-cooking rice, there is one more even faster option.  You can usually find plain cooked brown rice in the freezer section of the grocery store, near the frozen veggies.  You simply have to thaw the rice before using it in this recipe, but that would be the ultimate shortcut.  They also sell vacuum-packed cooked brown rice in packages on the rice aisle, but these usually have salt in them, which would really mess up this sweet recipe, so don't use that one here!

I've spent a lot of time talking about the rice in this recipe, but when it comes to whole grains like brown rice, there is just so much to say!  They are an excellent source of complex carbohydrates and B-vitamins for lasting energy plus plenty of fiber and protein, so it makes sense to use them as a start to your day, not just a side dish with dinner.

Now for the other four ingredients that transform the rice into this delicious pudding.  The first two are cinnamon and dried cranberries, because when I think of any classic rice pudding, those are always in there.  Then there's a little maple syrup for sweetness, and finally cashew milk.  This is a newer dairy substitute that I only started seeing a couple of months ago, and it seems to be creamier than regular almond or rice milk.  I think it's worth a try if you haven't had it before, but you could also use your favorite dairy substitute here and it should work just fine.  My favorite thing about this recipe is that it's simply a matter of mixing the ingredients together, putting it in the fridge, and then coming back the next day to find it ready to go - it's the ultimate healthy fast food breakfast!

**Note:  You can also heat the rice pudding in the microwave to serve as a hot breakfast. 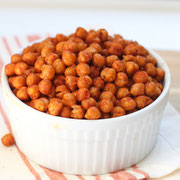 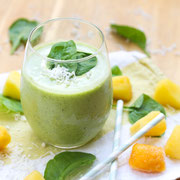